I’m suffering from Castonitis (cast-on-eye-tis). Although it’s not fatal, there is no pain, no itch, you might risk running out of needles. I’ve had a few happy cast offs this week, and then proceeded to go a little nuts with the casting on. I was SOOOOO thrilled to finally cast OFF the dreaded braided scarf (happy now Zeena?) 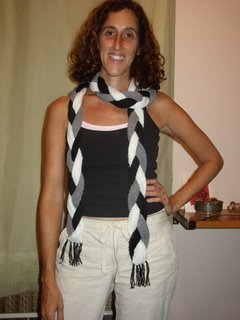 I also whipped up a little hat out of the hand spun, hand dyed wool I made 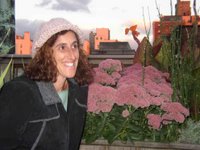 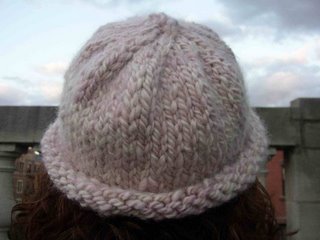 and last but not least. . . I finished the Sarah Tank. I’m really happy with the way it turned out. The pattern was only written for M-L, so I just messed around with the gauge a bit until I was happy with the smaller sizing. I made it from the really dreamy Debbie Bliss cotton angora. 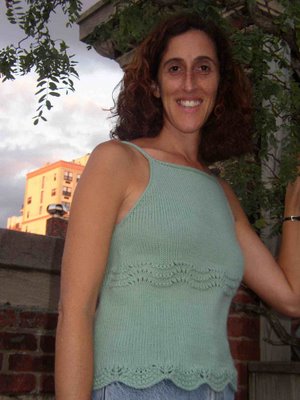 That’s when the casting on madness began. Fist of all, I had wanted to get rid of the rest of the Filatura Lanarota Summer Soft I bought during the Smiley’s summer sale. I bought a bag of ten and only used two for the ballet t-shirt. I decided to cast on, what was probably going to be my last summer weight garment for a while, the Spring Fling. 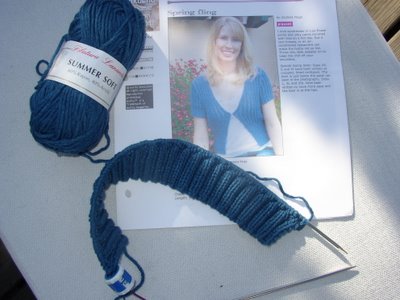 Then the madness started. I found out I’m going to go out with the Jersey Boys national tour. We start rehearsal in late October, and I’ll be hitting the road on November 20th. This means, once again, no Thanksgiving with my family. I had promised my brother in law and my niece that I would bring them scarves for Thanksgiving. Now I have to finish the scarves before I see them in mid October. So I cast on a tweedy green garter slip stitch scarf for Colin 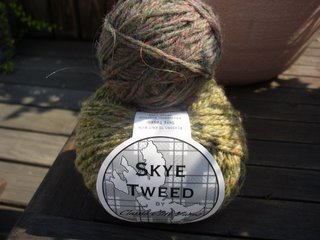 and a crazy novelty yarn (Fiona Feza) scarf for my niece Rachel. 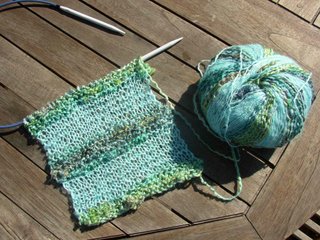 I also bought a yummy skein of Alpaca from the NJ Sheep and Wool Festival. I’m making a simple cable scarf for David. 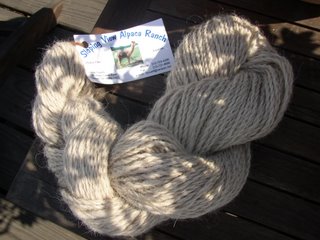 Last but not least in the “drowning in scarves” phenomenon . . . There’s the Red Scarf Project. For that I’m using a maroon yarn and casting on a cable, bauble scarf.

I’m in a bit of a panic thinking about packing for a tour. I feel like my knitting stuff is going to take a whole trunk. Thank god my union sets our luggage limit based on weight, and after all, yarn doesn’t weigh that much!