After years of saying “why would anyone want to read what I have to write” (all the while reading every knitting blog I could find), I finally gave in. My first post is kinda long – I’m just catching up.

So, here I am . . . a little about me. I’m a Stage Manager who lives in FABULOUS Park Slope Brooklyn. Years ago when I was working at Lincoln Center I used to sit in rehearsal and watch Ira Weitzman (the Musical Theatre Associate Producer) knit hats. I was fascinated by the strange and wonderful circular needles. I had learned to knit when I was a kid, but I never got past the ole’ garter stitch scarf stage. My next step towards knitting obsession was when I was working as a Stage Manager on the Broadway show 42nd Street. 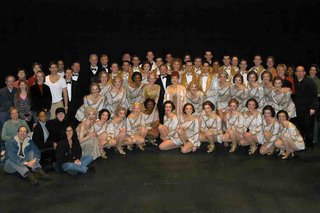 Many of the people from the hair and wardrobe department would knit on the deck (backstage) during the show. I finally asked Jack, one of the hair guys to teach me to knit. . . four years, many garments, and many hundreds of dollars of yarn later, here I am.

For my first post, I’ll give you all an abbreviated rewind of my year. This past season has been full of knitting triumphs and disasters.

Last summer I was in Seattle with the pre-Broadway (which in this case turned into STILL not on Broadway) run of Princesses. 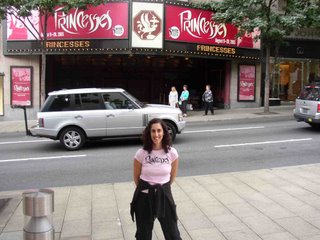 There was far too much moving scenery, and thus too many opportunities for chorus girls to be run over, for me to get much knitting done backstage. Not like Dessa Rose. . .that tech (the time in the rehearsal process when you move to the theatre and add all the sets, lights, costumes etc.) was so long I got three pairs of socks done, and started a poncho!

Next up in my season was Irving Berlin’s White Christmas. That show had a character who was supposed to be knitting a scarf on a train. The actress didn’t know how to knit. I taught her the knit stitch, and another yarn obsessed freak was born! By the time the show was over she finished her first scarf and hat. I was so proud.

As for my nine weeks in San Francisco, I had a Stitch and Bitch obsessed winter.

Here’s my version of the marsupial tote. I made it a messenger bag, and added a little stripe. 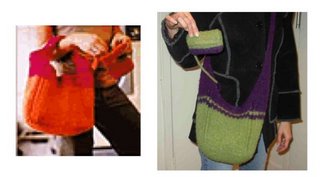 Here’s my Under the Hoodie

and last but not least, my Manly Sweater (on my manly man, David) 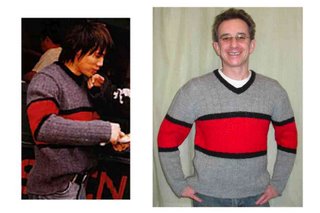 Before my summer vacation began, I had to survive a full Season at Encores! Encores is kind of hard to explain. For fans of Big Brother All Stars, think of the fast forward week (where they had to do a whole week of shows in one day). That’s what Encores is to musical theatre. It’s doing a big ole’ giant musical in two weeks. It’s Broadway on crack. With that schedule, it’s a miracle I got any projects off the needles. I managed to finish my lace scarf for my sister. I made it from a ball of REALLY thin mohair that was given to me as a thank you gift from the actress I taught to knit in White Christmas. When my fellow Stage Manager (and expert knitter) Alissa saw it, she said “why would you want to knit with thread!” After finishing it I wondered the same thing, but it turned out kinda swell. 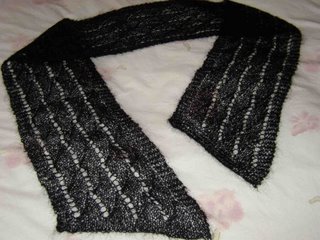 My favorite project this spring was the Bolero sweater from Weekend Knitting, by the fabulous Melanie Falick. It was pretty tricky, and it was the first thing I ever knit that looked EXACTLY like the picture in the book. When does that ever happen? I knit it with Cervinia Londra in Berry Heather. I bought it on sale at the crazy big Smiley’s Yarn Sale (a huge yarn shop in Queens) last spring. Okay, I know it’s kind of queer, but I had to pose just like the book. 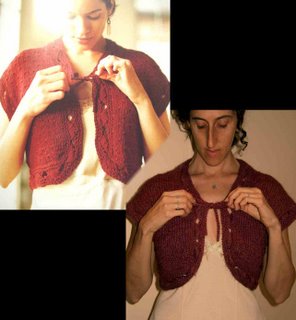 That takes me up to my fabulous summer vacation. More about that and my summer’s worth of FOs in my next post. 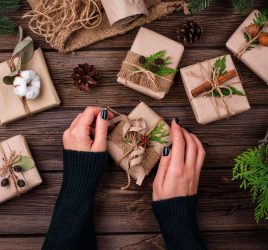