Fasting and finished objects (or the Shul of knitting)

Yesterday was Yom Kippur. Although I did fast, I decided this year to skip Shul in favor of knitting. Brenda Dayne often talks about the church of knitting (for nice Jewish girl, Brooklyn Knit Chick, it is the Shul of Knitting). I decided it be nice to spend the entire day working on a something for someone else. Late last night (long after both sundown and fasting had passed) I cast off and blocked the scarf for my brother in law Colin. Here it is posing in my garden. It wasn’t an easy fast this year, and I got pretty woozy by late afternoon, so a simple scarf pattern was all I could manage. 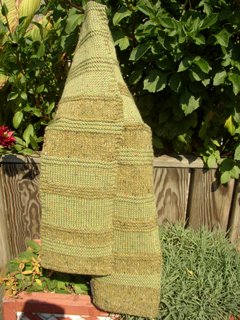 I decided a good way to make a contribution to the world (in my own little crafty way) was to get more involved with charity knitting. If anyone has their favorite pet project, I’d love to hear about it.

I cast on today for the Red Scarf Project. I’m pretty pleased with how it’s looking so far. I’m going with a machine washable wool/acrylic blend. I figured machine washable would be important if it fell into the hands of a sloppy college age boy! 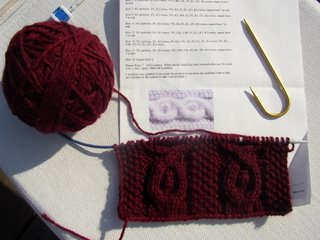 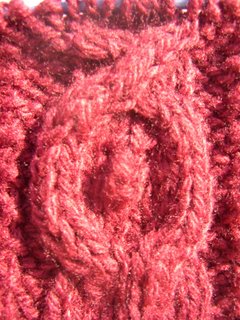 All this knitting for others has made my Spring Fling sweater slow down to a crawl. Here’s all the progress I managed to make in that: 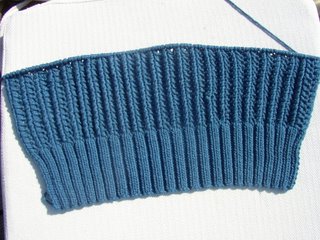 Today I was sitting up on the roof deck, enjoying the freaky 78 degree day, listening to old Cast On episodes. We all know about charity knitting, but did you know about protest knitting? Neither did I. There’s a web site called Steal This Sweater (that name will not be lost on Abbie Hoffman fans). On the site are all sorts of machine knit sweaters with various political statements on them. There are also the Body Count mittens.

Here’s the text from the web site:

These mittens memorialize the number of American soldiers killed in Iraq at the time the mittens are made. Since the numbers escalate daily, each mitten has a different number and date. Seen together, the pair of mittens show a span of time and the increase in killed soldiers over that time. I began these mittens on March 23, 2005, when 1524 American soldiers had been killed in Iraq. After finishing the first mitten, I began work on the second mitten one week later, on March 31, 2005. The number of American troops killed in Iraq had risen to 1533 by then. This was a great project to knit in public, and I look forward to wearing them somewhere cold soon. 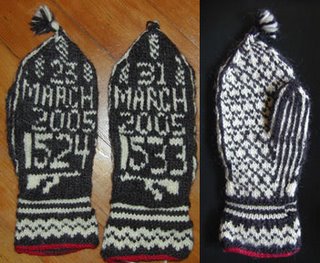