In mourning for Rhinebeck

Well, I’m still trying to get over missing Rhinebeck last weekend. It was my niece’s bat mitzvah, and our family reunion.

It was a crazy deja vu experience going to a bat mitzvah. Watching 13 year olds trying not to look like they care about dancing with eachother. The most bizarre thing was the music they played. Sure there was some modern stuff, but most of it was the same music I danced to nearly 30 years ago! That would be like me dancing to the Andrew Sisters at the bat mitzvahs of the 70’s! Here’s the kids doing (I kid you not) the Electric Slide! 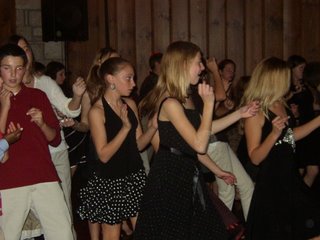 I did get a little knitting done on the plane, and gave away a few knitted gifts. Here’s my adorable niece Rachel with her new scarf. About three minutes after this photo was taken, it was dipped in ice cream and then dropped on the floor (the scarf, not the photo). 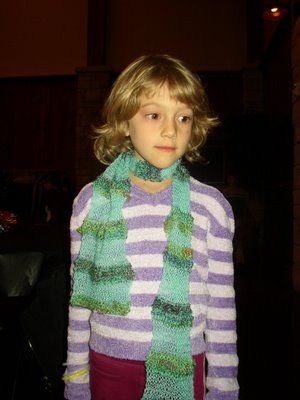 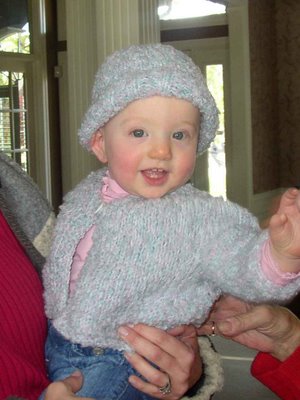 Right now I’m up to my ass in Jersey Boys. We started rehearsals on Monday and it’s a big show. It looks like a small show until you look a little closer, and then holy ^&*@#$ there’s a lot of props, costumes, shifts, a lotta everything.

Tonight I’m taking my last night to light a fire, blog, and do a little spinning on my (trumpet sound here) new Golding Ring Spindle . . . YEAH. My pal Francesca bought it for me at Rhinebeck. Isn’t she a beaut! 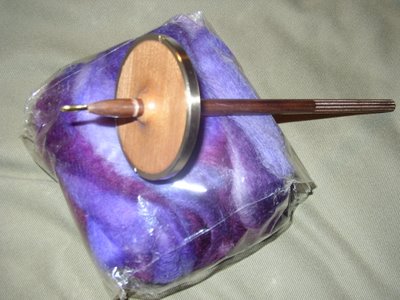 So after tonight it will be all musical theatre all the time (until we open). One of the women in the cast is a knitter! At least there will be one fellow yarn o’holic on the road with me.