The tao of spinning (and other life lessons)

I’ve been feeling rather reflective the last few days. Maybe it’s the season, maybe it’s getting ready to go back to work. These wonderful days of relaxing in our garden, knitting, spinning, enjoying Brooklyn are all about to come to an end. I spent the day in the garden on Wednesday. It was time to start the fall garden chores. Between early October and late November we have to dig up various bulbs and tubers to store for the winter, divide and replant others, spray the roses, and fruit tree . . . put our garden to sleep for the winter, and hope it wakes up in the spring. It’s always a bit of an exercise in faith. You do the best you can, but ultimately it’s always a crap shoot. There’s no way to tell what spring will bring. 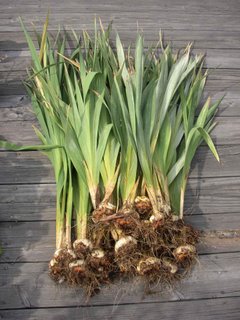 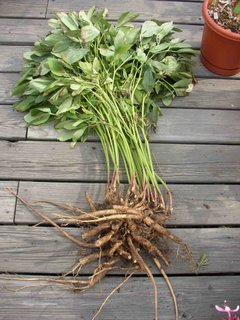 (Huge clump of Peony root, to be divided and replanted)
Just like life, you do the best you can to investigate your choices, weigh your options and then make your decision. Once you do, it’s an exercise in faith. I’m about to leave my home with the Jersey Boys tour and I don’t know how long I’ll be gone. I think it’s a good decision, but I’ll know when I know.

That evening I went over to Alexandra’s house to do a little spinning. I had a blast. She started pulling out bag after bag of wool, alpaca, whole fleeces, top, roving. I was literally surrounded by fiber. She had a huge basket of yarn, some store bought, some she had spun herself, some so soft you wanted to roll around in it. Then she cracked out the Babe. A crazy wheel made from PVC pipe and a wheelchair wheel. It looks like ass, but it spins great! I had my sad little CD spindle and was once again trying my hand at spinning. Alexandra took out a huge ball of top roving and told me to pull off a section. I was pulling like crazy and it would not break. She said I was pulling too hard. That if I loosened my grip and tugged gently, the fibers would slide apart and the piece would give. That’s why I was having trouble with my drafting. I was pulling too hard, and the fibers wouldn’t give.

So I’m off to a new job, in a new city. I have know idea what to expect or where my life is heading next.

Maybe I’ll try loosening my grip and see what gives.