Cocktails and free yarn . . . what could be bad?

The ONLY good thing about spending you whole life working 6 days a week, is how damn much you appreciate your one and only day off. Monday I had a knitting filled day from sun up to sun down. I spent all day in my p.j.s sitting on the couch knitting and watching movies. I decided the K1 P1 rib of Tempting II was so tedious that I would alternate each round with a row or two of the cotton cable. But the whole day was building up to the big yarn swap at Chicks with Sticks. It was AWESOME!!!!

The evening began with a delightful ride on the J train to get to the Bliss Bar. What made this ride particularly amusing was the 2 year old that kept pulling the next stop cable. His dad did not notice until the kid did it about 9 times in a row. It really didn’t matter because it was rush hour and someone wanted to get off at every stop anyway. It was just amusing watching the “when I pull this cord the red light comes on . . . cool”. Babies really are little scientists. The next delight on the J train was the park. I’ve never taken J train as early as I did on Monday, so it’s always been dark when I pass this park in Noe Valley. This time it was only 5:45 pm and I’ve never seen so many dogs out in my life. The canine to human ratio was 1 to 1. Pretty cool.

Next stop to whet my appetite and get me in the mood (as IF I need any help getting in the mood for free fiber), was the super cool Noe Knit. There I ran into fellow Chicks on their way to the yarn swap. It was supposed to begin at 7:30 pm, but by 6:50 the table, bench, side table and floor were already filling up. (Time for a little browsing before your turn) (The summer knit book I had my eye on and lost to a lower number – damn!)

So here’s how this crazy thing worked. Everyone who brought yarn (17 of us), go to pick a number. Then we went up one by one as our number was called and got to pick one thing. If there were multiple balls of the same yarn that counted as one thing (including 21 spools of this really nice grey cotton, or a HUGE skein of cashmirino). I picked (gulp) 16 out of 17. Very sad, one by one I saw my first picks taken. However, there was plenty to go around. There’s Leslie (lucky #2) holding the $82 GIANT skein of cashmirino. That’s Kathy in the background (lucky #1) holding the pattern book I had my eye on – crap!

After a few rounds of picking, it was opened up to all the non yarn contributors. Look at Matthew in the background looking like he is mid pounce There’s 7 different colors of chenille that come to about 700 yards. I think I’m going to design a striped raglin 1/2 sleeve sweater with it. It may not come out that great, but I want to work more on my own sweater construction and design, and using some free yarn seems like a good idea. This is really thin, thread thin, yarn. I have three skeins of it. I have no idea what the yardage is. I’m going to do the ole’, count the wraps around an 18″ piece of cardboard to find out. I guess I’ll make some kind of lace shawl with it. Any suggestions??? Here’s a close up of some yummy chunky handspun I got. What to do, what to do. I got 7 skeins of this thick, thin Bernat cotton n’ silk. I’m not sure I can wear lime green, and I don’t really know what to do with it, but I’m open to suggestions.

All in all, it was a fantastic night. I will really miss this group when I go home. It’s a great group of women (and men), and I love being around their energy. There’s something so amazing about being in a room full of knitters. It’s an energy and creative spirit that really feeds me. I could easily see myself being very happy to be around that every day. 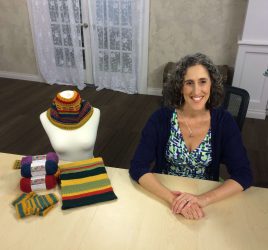