Win a Copy of “Knitting Ephemera”!!

This is the book I’ve been waiting for. It was a couple of years ago that Carol Sulcoski first told me about her book idea. Knitting trivia, weird facts and general fascinating tidbits about knitting! Sign me up!

Last month at Vogue Knitting Live, I got to attend the book launch and get my own autographed copy . . . now it’s time for two lucky winners to get their own copy!

As if the prospect of winning this amazing book isn’t great enough . . .

Everyone who enters will get e-mailed a code for one FREE pattern from Carol’s Ravelry store!!

I thought it would be fun to hear from the author herself. Read and get excited, then scroll to the bottom of the page for the raffle entry!

Q: What first gave you the idea for this book?

I have written a lot of articles on knitting-related topics. As I did research for the articles, I interviewed many people with fascinating stories. For example, when I wrote an article on the history of circular needles, I spoke with the owners of Denise Interchangeables, and they told me a great story how the interchangeables were invented. I loved learning where knitting terms came from, such as the raglan sweater being named after Lord Raglan, and I also was fascinated with vintage knitting magazines and booklets. I really felt that there was a book in there somewhere but wasn’t exactly sure how to present the idea. One day I was having lunch with Trisha Malcolm and I explained the idea, and she knew in an instant that it would make a great collection of knitting tidbits. She’d been thinking of a similar topic and was looking for someone to write it. It was a match made in heaven.

Q: One of my favorite bits of random knitting info was the connection between Kaffe Fassett and the film “Midnight Cowboy”, I know it will be impossible to pick your favorite bit of trivia, but was there one that surprised you the most?

I loved learning the story of the Kitchener Stitch, and how it is named after Lord Kitchener. Kitchener was a big military commander in the British army and after serving in various wars at the end of the nineteenth century, was brought on board to help with preparations for WWI. The history geek in me loves knowing that he was one of the few in the British government who realized that WWI would be a lengthy and grueling war. Most politicians at the time were convinced that Britain would smash through and achieve victory in months. So Kitchener was responsible for getting the British war machine up and running, so that Britain would be able to generate enough food, cloth and war materiel for a length engagement.

Q: If you could write a book of trivia and fun facts on a non knitting subject, what would it be?

I’d love to write one about Philadelphia! So many fun stories and interesting factoids there.

Q:I think one of my most helpful bits was the common measurement. I use a dollar bill to measure my knitting all the time when I can’t find a tape measure (somewhere there are thousands of my tape measures along with on random sock). Do you have a knitting hack that you use all the time?

I know that the width of my hand is very close to three inches. So when I can’t find a tape measure, I count the widths of my hand to get a general sense for how long my knitting is.

Q: Was there any bit of knitting trivia that didn’t make it into the book that you can share with our readers?

Once I submitted the manuscript, I kept on coming across little bits that I wanted to save. So I’m hoping that any unused ones will be part of the sequel! For example, I recently learned that the Egyptians called linen “woven moonlight.” Isn’t that lovely?

Q: Do you have any new books coming out that you are allowed to tell us about (ok, I already know the answer, cause I’m in it, just want Carol to tell you).

I’m so glad you asked! This fall, my next book in the Studio series will be published. It’s called Self-Striping Yarn Studio, and it contains both technical information to explain how to use self-striping yarns, as well as a selection of patterns from a group of amazing designers. (Patty has a pattern in there and it’s just gorgeous!)

Giveaway will run now through 11:59 pm EST on Feb. 24th, 2016 and winner will be announced by by Feb. 25th. The winner will be contacted for their mailing address.

Enter to win by providing your email address in the first option in the Rafflecopter form so I can contact you if you win. For additional entries you can use the other options to share on social meidia. The more entries the better chance of winning!

Make sure to follow along on my social media & subscribe to my newsletter so you know when the winner is announced. Good luck!

Take a sneak peek at the book HERE.

Did you know that knitting burns 102 calories per hour? Or that November is national Knit a Sweater month? Or that there are more sheep than people in New Zealand, Australia, and Iceland? These fun facts and many more make up Knitting Ephemera, a treasury of trivia for knitting enthusiasts. Containing 300 entries, this informative collection covers everything from knitting’s appearances in history, literature, folklore, and pop culture to little-known facts about wool, sheep, and fiber producers. Helpful tips and techniques are included, as well as tidbits on crochet, spinning, and weaving. With illuminating illustrations throughout,Knitting Ephemera will entertain knitters and needlecrafters everywhere. 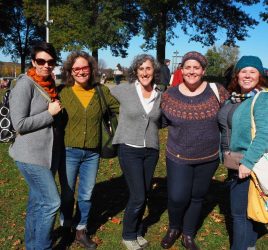 Coast to Coast: Join Me at an Upcoming In-Person Event